Introducing you to the ‘Attention-seekers’ I am sure that you have undoubtedly come across links with extremely enticing captions and you reached a different world online once you clicked where the content did not match to your expectation or the visuals and information displayed disturbed your mind. The illustration above[1] is probably the best representation of how information is displayed in the modern world in comparison to the time when content circulation was in its infancy. It is very evident that the headlines on the right, almost instantly, tempt you to click on them. This phenomenon, in common terms, is called the art of ‘Clickbaiting’.

The Merriam Webster Dictionary says that a clickbait is “something (such as a headline) designed to make readers want to click on a hyperlink especially when the link leads to content of dubious value or interest.”[2] It is the intentional act of over-promising or otherwise misrepresenting — in a headline, on social media or in an image. Generally, clickbaits have the following characteristics-

A. Eye-catching and an easily skimmable headlings

B. Hilarious images or videos

BuzzFeed and Upworthy are the two biggest and best clickbait producers on the web.[1]

A peek into the Origin

To know about the history of clickbaits we must have a rough idea of the much older technique of link baiting. It is believed that clickbaiting has evolved from link baiting which was a practice to compel users to click on certain links on the web and take users to a different site. It was used to boost the link profile of the site that published it. Clickbaits are also used for the same purpose but with a wide scope as compared to link baits.The main purpose of clickbaits is to get many click throughs and pageviews which results in higher ad revenue implying increase in profit for the publisher. Clickbaits are not restricted to the internet and even traditional newspapers and magazines have used clickbaits in a consummate manner to increase the sales for more than one hundred years. This claim can be supported by the fact that British Tabloids, universally reviled for their lack of journalistic integrity, are famous for their use of many techniques common to clickbaits to boost their circulation. Due to development and evolution of the rules of ethical Search Engine Optimisation, link baiting has become less common but clickbaiting is still in trend. Clickbaits can also be seen as a form of yellow journalism, which presented eye catching headlines with no legitimate well searched news.[1]

The Psychology behind the usage of Clickbaits

It is a well known fact that the usage of technology in all aspects of life has become the new normal in almost all parts of the world and in some parts, the situations are in the process of leading to such a stage. To demonstrate this, let us take the example of India as a model : 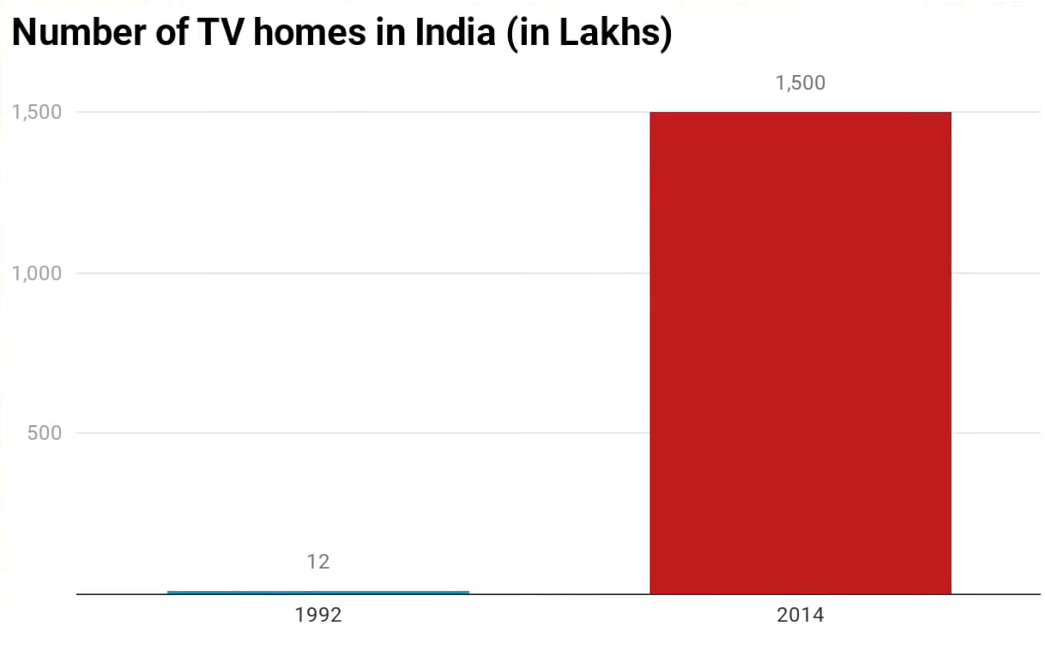 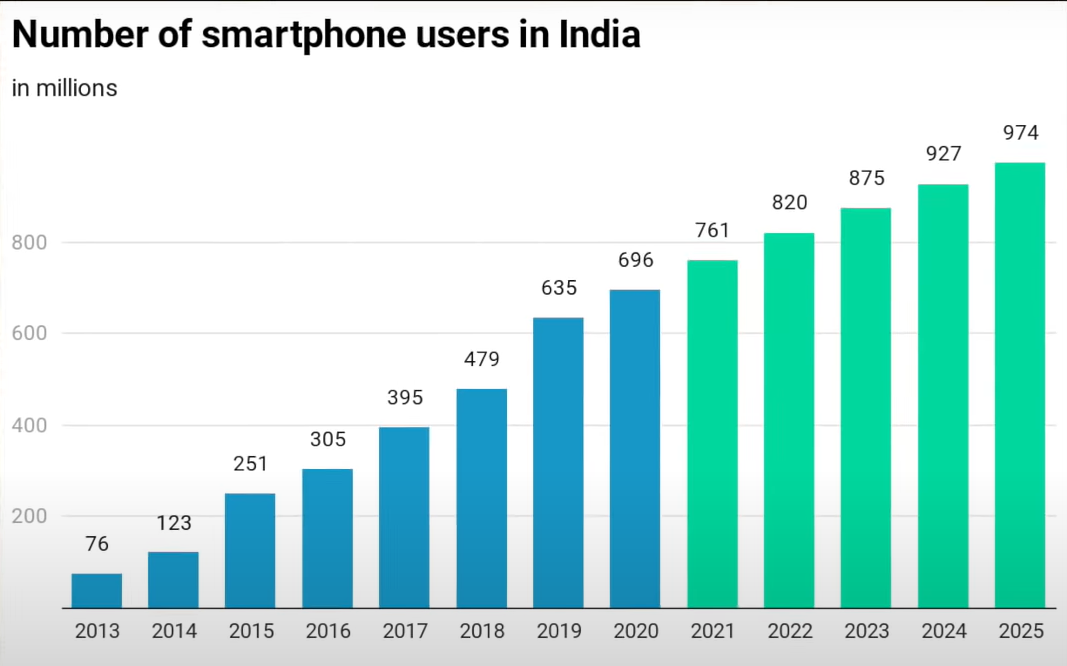 Owing to the Internet, an extreme growth in the number of smartphone users in India can also be seen as in the figure alongside.5 For 68% Indians, smartphones are a method of staying in link with the current issues of the world.[6]
Videos totalling up to a duration of 300 hours are uploaded on Youtube every minute.

All of these statistics show that there is a hoard of information available for Internet consumers like us. These were all reports of India which is a developing nation. We can well imagine the extremity of the influence of the Internet in developed nations. On one hand, this is indeed a positive facet but on the other hand, this creates an information overdose. Due to such a humongous existing database of information, all websites and ads focus on grabbing just one aspect- OUR ATTENTION! The nobel laureate Herbert Simon had coined a new term called the ‘attention economy’.[7] In such an attention economy, the number of clicks that a post or a youtube video gets, is monitored and the more time we spend on such a post, the more ad revenue the creator gets.

For example, the following statement would be an example of a closed loop statement:
The old woman broke her neck after falling into the ditch.

An example of an open loop statement for the same sentence would be:
That which happened after the old woman fell into the ditch, will leave you awestruck!

Such statements form incomplete loops in the brain and tempt us to click instantly.

The Mutilated Face of Journalism and the phenomenon of ‘Newsjacking’

“Newsjacking is the process of injecting your brand into the day’s news, creating a twist that grabs eyes when they’re open widest.”[2] It is a tragedy for the sake of sales reflects poorly on your brand and can cause a big backlash. A report by the Columbia Journalism Review highlighted the case of online magazine Slant, which pays writers $100 per month, plus $5 for every 500 clicks on their stories. If the criterion for posting the story on the website is determined by the number of clicks, then we are treading into a wrong path. There is going to be an emphasis on the trivial, rather than stories which require more considered reading. Journalists will eventually dumb down their stories and only focus on making it clickbait-y because the time that a viewer spends on the post is nowhere in consideration but only the click is.
Netherlands-based Blendle allows people to read stories from a host of newspapers and magazines, and offers a pay per story set up with a money back guarantee if readers feel short-changed or dissatisfied.

As we are going through a pandemic with no signs of a vaccine yet, how often do we come across headlines on the web showing that having a medicine or a particular practice can save us from COVID. Fake headlines also claim that vaccines have been formulated already.
There are various types of clickbaits which exploit the medicinal needs of people to get views and promote their content on the web. They try to use the fear of people into their own profit. Most often, when you click on any of these headlines they show medicines or cures full of ambiguity or no relevant content at all.
More people are also targeted at the most insecure sides. Comparison pictures of photoshopped fat and slim bodies (mostly achieved overnight) in order to promote a bottle of fat-burning tablets is the best example.

It is a very common experience that showy buttons with the name of a desired file are presented as download links but clicking on them, often installs harmful applications without permission and alters the configuration of our devices. Also, in this era of widespread Internet usage, all age groups equally browse the web. Some clickbait-y links often lead to an inappropriate audience to be exposed to sexually explicit content online. There are absolutely no provisions in the statutes regarding internet security, which is indeed questionable before law.

Facebook’s Take on the issue
Facebook being the largest social networking site has tried to take strict actions regarding clickbaits. It not only regulates not only the headlines but also the content uploaded on Facebook.2 According to a report in 2016 by Wall Street journal, Facebook was taking efforts to punish alluring headlines which were meant to distract or tempt the users and are used for promotion. This will allow Facebook to sort contents according to the number of clickbaits or distracting headlines and the contents having clickbaits will be put at the bottom of the list.

The internet has almost become a parallel and fully functional world besides our daily lives. Since it is such an integral part of our lives, it is not just the content creator that needs to act responsibly. We, the consumers should also surf online responsibly in order to make the Internet a better and safer forum. Support creators on the basis of the quality of their content and make sure that you utilise various features like reporting and blocking. Reporting helps bring inappropriate content to the notice of the authorities. With a hoard of information online, it is not easy to regulate content single-handedly and effective regulation requires the cooperation of consumers as well. Most importantly, do not let the information overload online restrict your reasoning and take care that you fact check information before sharing it online to a larger group of consumers. Segregate the priority of your personal life from your life online and strive to strike the perfect balance of peace.
So the next time you come across a video titled, “SHOCKING | Ranbir Kapoor Alia Bhatt BREAK – UP, Fans Have This EPIC Reaction”[9], although it might seem believable and expected, do not keep your expectations too high only to get fooled.

Pornography Ban: Will a Ban Curb the Menace.

Why is dual citizenship the need of the hour for India right now?

Voting Rights of Prisoners in India : An Analysis

Rights of Dead: An Analysis

Custodial Deaths in India : An Analysis

Section 66A of IT Act : Still a Controversy

I clicked on this article after reading “Read this before shit happens”. So basically you guys also used a click bait, but it was a nice read, and also the solutions provided were practical.

Medical Malpractice and Negligence : An Analysis

Maintenance rights of the Second Wife : An Analysis

Judges’ Recusal as a way of serving Natural Justice and Overcoming Bias: An Analysis

Sedition In India: A Colonial Repression Enslaving Freedom of Speech and Expression

Constitutionality of Capital Punishment: An Analysis

Pegasus Spyware Surveillance: A Slow Death of Democracy in Silence